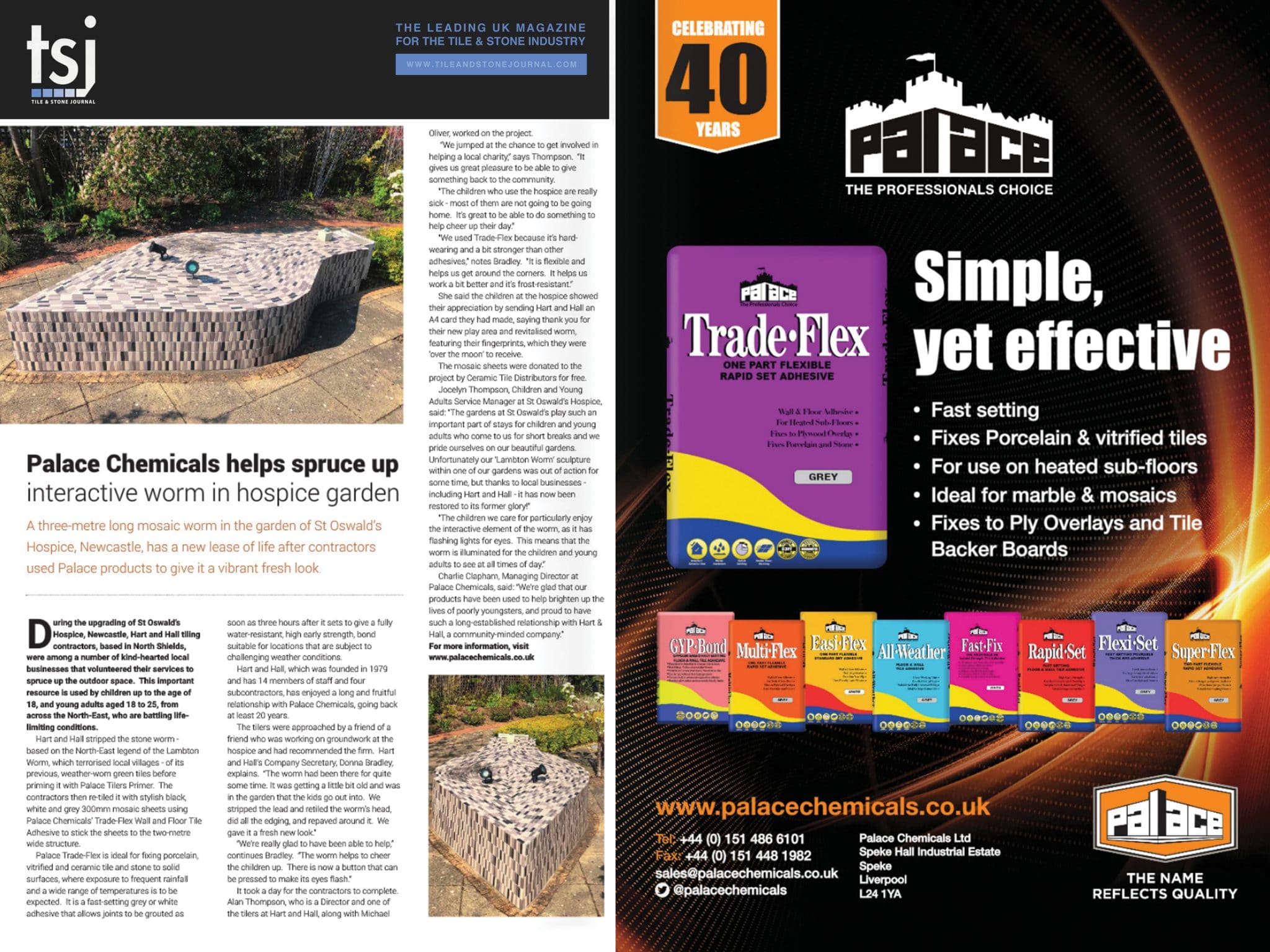 During the upgrading of St Oswald’s Hospice, Newcastle, Hart and Hall tiling contractors, based in North Shields, were among a number of kind-hearted local businesses that volunteered their services to spruce up the outdoor space. This important resource is used by children up to the age of 18, and young adults aged 18 to 25, from across the North-East, who are battling life-limiting conditions.

Hart and Hall stripped the stone worm – based on the North-East legend of the Lambton Worm, which terrorised local villages of its previous, weather-worn green tiles before priming it with Palace Tilers Primer. The contractors then re-tiled it with stylish black, white and grey 300mm mosaic sheets using Palace Chemicals’ Trade-Flex Wall and Floor Tile Adhesive to stick the sheets to the two-metre wide structure. Palace Trade-Flex is ideal for ﬁxing porcelain, vitriﬁed and ceramic tile and stone to solid surfaces, where exposure to frequent rainfall and a wide range of temperatures is to be expected.

It is a fast-setting grey or white adhesive that allows joints to be grouted as soon as three hours after it sets to give a fully water-resistant, high early strength, bond suitable for locations that are subject to challenging weather conditions. Hart and Hall, which was founded in 1979 and has 14 members of staff and four subcontractors, has enjoyed a long and fruitful relationship with Palace Chemicals, going back at least 20 years. The tilers were approached by a friend of a friend who was working on groundwork at the hospice and had recommended the ﬁrm. Hart and Hall’s Company Secretary, Donna Bradley, explains. “The worm had been there for quite some time. It was getting a little bit old and was in the garden that the kids go out into. We stripped the lead and retiled the worm’s head, did all the edging, and repaved around it. We gave it a fresh new look.” “We’re really glad to have been able to help,” continues Bradley.

The worm helps to cheer the children up. There is now a button that can be pressed to make its eyes flash.” It took a day for the contractors to complete. Alan Thompson, who is a Director and one of the tilers at Hart and Hall, along with Michael Oliver worked on the project. “We jumped at the chance to get involved in helping a local charity,” says Thompson. “It gives us great pleasure to be able to give something back to the community. “The children who use the hospice are really sick – most of them are not going to be going home. It’s great to be able to do something to help cheer up their day.”

“We used Trade-Flex because it’s hard-wearing and a bit stronger than other adhesives,” notes Bradley. “It is flexible and helps us get around the corners. It helps us work a bit better and it’s frost-resistant.” She said the children at the hospice showed their appreciation by sending Hart and Hall an A4 card they had made, saying thank you for their new play area and revitalised worm, featuring their ﬁngerprints, which they were ‘over the moon’ to receive. The mosaic sheets were donated to the project by Ceramic Tile Distributors for free. Jocelyn Thompson, Children and Young Adults Service Manager at St Oswald’s Hospice, said: “The gardens at St Oswald’s play such an important part of stays for children and young adults who come to us for short breaks and we pride ourselves on our beautiful gardens.

Unfortunately our ‘Lambton Worm’ sculpture within one of our gardens was out of action for some time, but thanks to local businesses – including Hart and Hall – it has now been restored to its former glory!” “The children we care for particularly enjoy the interactive element of the worm, as it has flashing lights for eyes. This means that the worm is illuminated for the children and young adults to see at all times of day.” Charlie Clapham, Managing Director at Palace Chemicals, said: “We’re glad that our products have been used to help brighten up the lives of poorly youngsters, and proud to have such a long-established relationship with Hart & Hall, a community-minded company.”