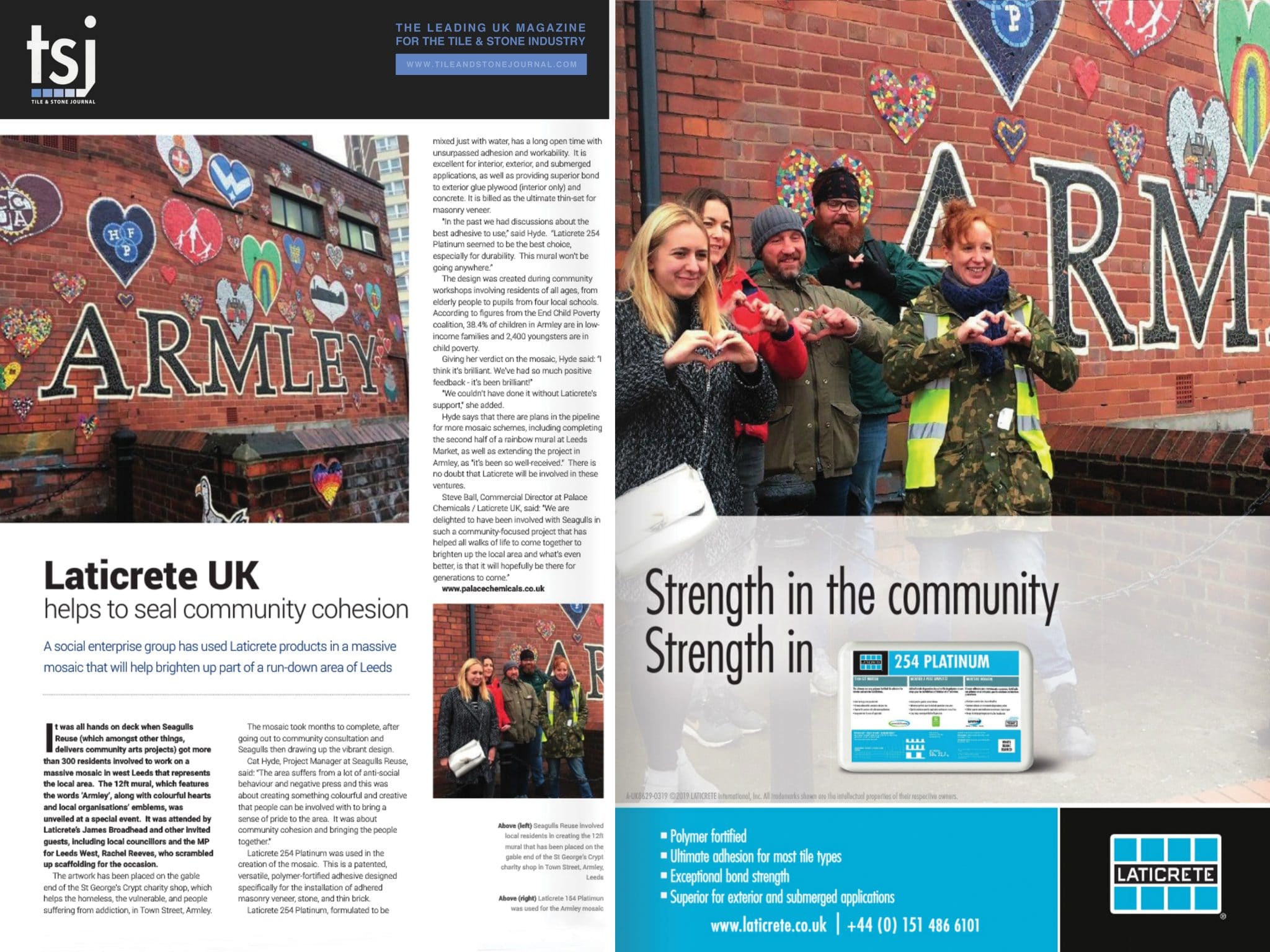 It was all hands on deck when Seagulls Reuse (which amongst other things, delivers community arts projects) got more than 300 residents involved to work on a massive mosaic in west Leeds that represents the local area. The 12ft mural, which features the words ‘Armley’, along with colourful hearts and local organisations’ emblems, was unveiled at a special event. It was attended by Laticrete’s James Broadhead and other invited guests, including local councillors and the MP for Leeds West, Rachel Reeves, who scrambled up scaffolding for the occasion.

The artwork has been placed on the gable end of the St George’s Crypt charity shop, which helps the homeless, the vulnerable, and people suffering from addiction, in Town Street, Armley. The mosaic took months to complete, after going out to community consultation and Seagulls then drawing up the vibrant design. Cat Hyde, Project Manager at Seagulls Reuse, said: “The area suffers from a lot of anti-social behaviour and negative press and this was about creating something colourful and creative that people can be involved with to bring a sense of pride to the area. It was about community cohesion and bringing the people together.” Laticrete 254 Platinum was used in the creation of the mosaic. This is a patented, versatile, polymer-fortiﬁed adhesive designed specifically for the installation of adhered masonry veneer, stone, and thin brick.

Laticrete 254 Platinum, formulated to be mixed just with water, has a long open time with unsurpassed adhesion and workability. It is excellent for interior, exterior, and submerged applications, as well as providing superior bond to exterior glue plywood (interior only) and concrete. It is billed as the ultimate thin-set for masonry veneer. “In the past we had discussions about the best adhesive to use,” said Hyde. “Laticrete 254 Platinum seemed to be the best choice, especially for durability. This mural won’t be going anywhere.”

The design was created during community workshops involving residents of all ages, from elderly people to pupils from four local schools. According to ﬁgures from the End Child Poverty coalition, 38.4% of children in Armley are in low-income families and 2,400 youngsters are in child poverty. Giving her verdict on the mosaic, Hyde said: “I think it’s brilliant. We’ve had so much positive feedback – it’s been brilliant!” “We couldn’t have done it without Laticrete’s support,” she added.

Hyde says that there are plans in the pipeline for more mosaic schemes, including completing the second half of a rainbow mural at Leeds Market, as well as extending the project in Armley, as “it’s been so well-received.” There is no doubt that Laticrete will be involved in these ventures. Steve Ball, Commercial Director at Palace Chemicals / Laticrete UK, said: “We are delighted to have been involved with Seagulls in such a community-focused project that has helped all walks of life to come together to brighten up the local area and what’s even better, is that it will hopefully be there for generations to come.”

Click here to find out more about Laticrete 254 Platinum.