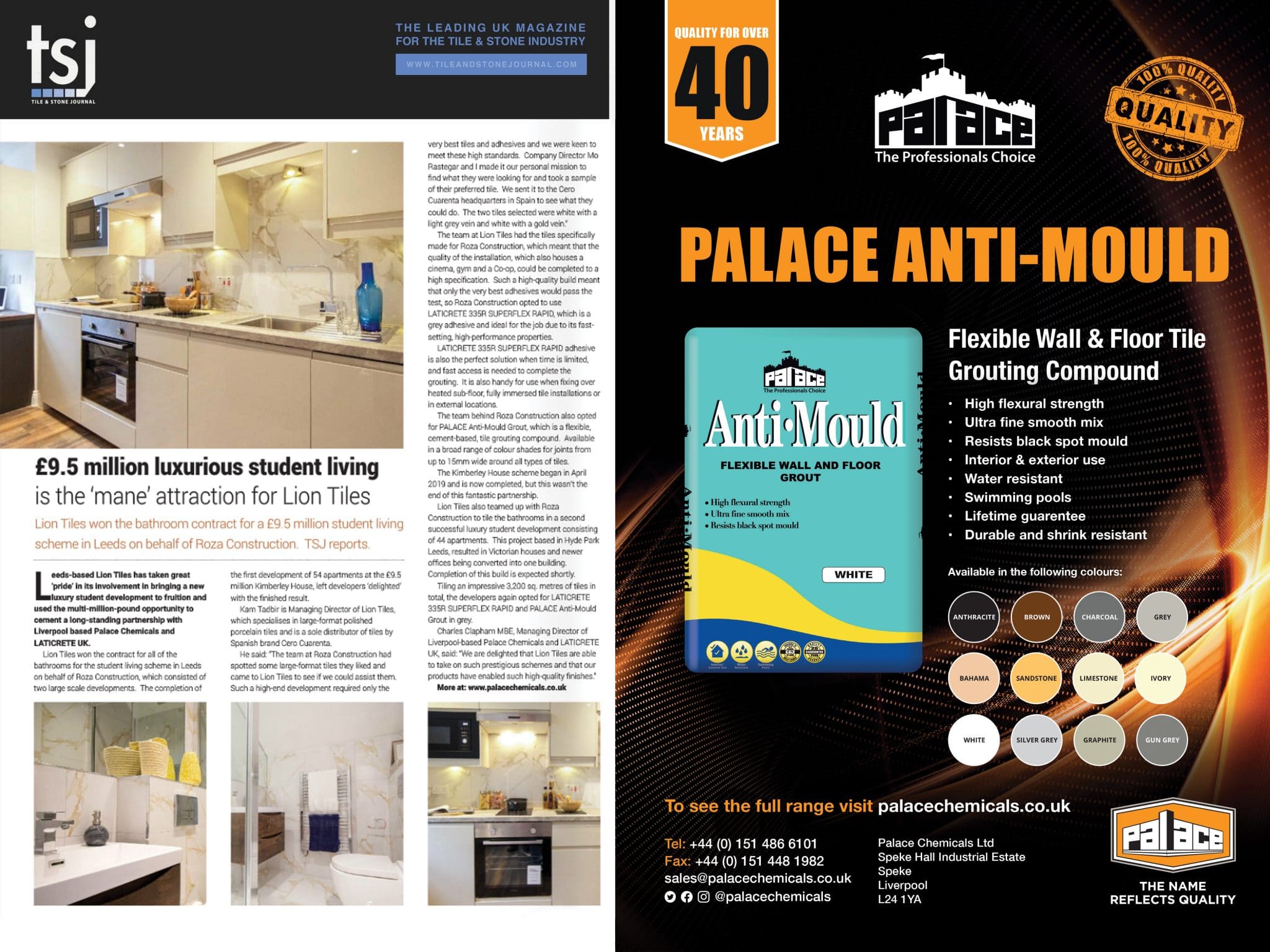 Leeds-based Lion Tiles has taken great ‘pride’ in its involvement in bringing a new luxury student development to fruition and used the multi-million-pound opportunity to cement a long-standing partnership with Liverpool based Palace Chemicals and LATICRETE UK.

Lion Tiles won the contract for all of the bathrooms for the student living scheme in Leeds on behalf of Roza Construction, which consisted of two large scale developments. The completion of the ﬁrst development of 54 apartments at the £9.5million Kimberley House, left developers ‘delighted’ with the finished result. Kam Tadbir is Managing Director of Lion Tiles, which specialises in large-format polished porcelain tiles and is a sole distributor of tiles by Spanish brand Cero Cuarenta. He said: “The team at Roza Construction had spotted some large-format tiles they liked and came to Lion Tiles to see if we could assist them. Such a high-end development required only the very best tiles and adhesives and we were keen to meet these high standards.

Company Director Mo Rastegar and I made it our personal mission to ﬁnd what they were looking for and took a sample of their preferred tile. We sent it to the Cero Cuarenta headquarters in Spain to see what they could do. The two tiles selected were white with a light grey vein and white with a gold vein.” The team at Lion Tiles had the tiles speciﬁcally made for Roza Construction, which meant that the quality of the installation, which also houses a cinema, gym and a Co-op, could be completed to a high speciﬁcation. Such a high-quality build meant that only the very best adhesives would pass the test, so Roza Construction opted to use Laticrete 335R Superflex Rapid, which is a grey adhesive and ideal for the job due to its fast-setting, high-performance properties.

Laticrete 335R Superflex Rapid adhesive is also the perfect solution when time is limited, and fast access is needed to complete the grouting. It is also handy for use when ﬁxing over heated sub-floor, fully immersed tile installations or in external locations. The team behind Roza Construction also opted for Palace Anti-Mould Grout, which is a flexible, cement-based, tile grouting compound. Available in a broad range of colour shades for joints from up to 15mm wide around all types of tiles. The Kimberley House scheme began in April 2019 and is now completed, but this wasn’t the end of this fantastic partnership. Lion Tiles also teamed up with Roza Construction to tile the bathrooms in a second successful luxury student development consisting of 44 apartments.

This project based in Hyde Park Leeds, resulted in Victorian houses and newer ofﬁces being converted into one building. Completion of this build is expected shortly. Tiling an impressive 3,200 sq. metres of tiles in total, the developers again opted for Laticrete 335R Superflex Rapid and Palace Anti-Mould Grout in grey. Charles Clapham MBE, Managing Director of Liverpool-based Palace Chemicals and LATICRETE UK, said: “We are delighted that Lion Tiles are able to take on such prestigious schemes and that our products have enabled such high-quality ﬁnishes.”