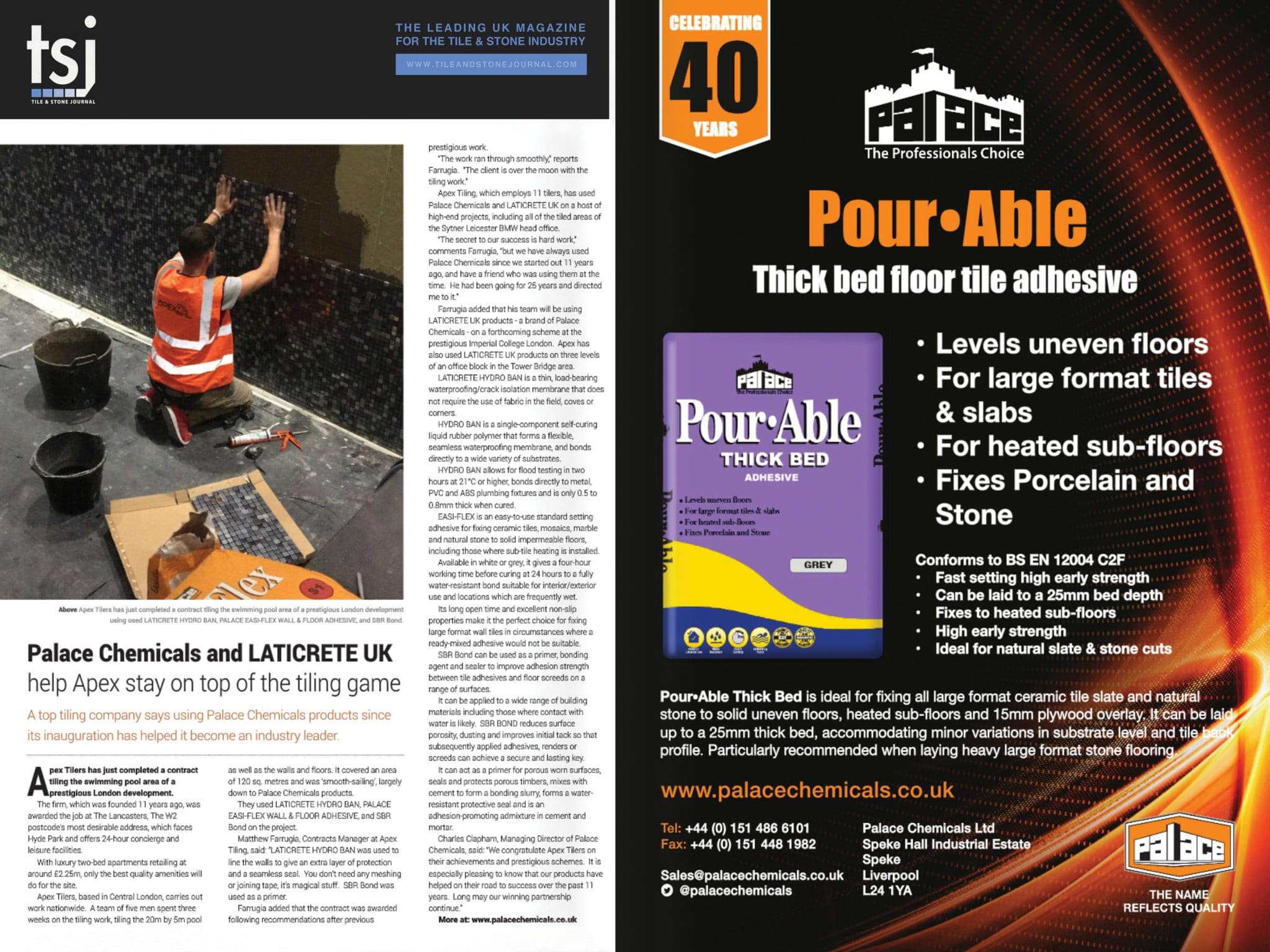 The firm, which was founded 11 years ago, was awarded the job at The Lancasters, The W2 postcode’s most desirable address, which faces Hyde Park and offers 24 hours concierge and leisure facilities. With luxury two-bed apartments retailing at around £2.25m, only the best quality amenities will do for the site. Apex Tilers based in Central London, carries out work nationwide. A team of five men spent three weeks on the tiling work, tiling the 20m by 5m pool as well as the walls and floors. It covered an area of 120 sq. meters and was ‘smooth sailing’, largely down to Palace Chemicals products.

The used Laticrete Hydro Ban, Palace Easi-Flex Wall & Floor Adhesive and SBR Bond on the project. Matthew Farrugia, Contracts Manager at Apex Tiling said “Laticrete Hydro Ban was used to line the walls to give an extra layer of protection and a seamless seal. You don’t need any meshing or joining tape, it’s magical stuff.” SBR Bond was used a primer. Farrugia added that the contract was awarded following recommendations after previous prestigious work.

“The work ran through smoothly”, reports Farrugia. “The client is over the moon with the tiling work.” Apex Tiling, which employs 11 tilers, has used Palace Chemicals and Laticrete UK on a post of high-end projects, including all of the tiled areas of the Sytner Leicester BMW head office. “The secret to our success is hard work,” comments Farrugia, “but we have always used Palace Chemicals since we started out 11 years ago, and have a friend who is using them at the time. He has been going for 25 years and directed me to it.”

Farrugia added that his team will be using Laticrete UK products – a brand of Palace Chemicals – on a forthcoming scheme at the prestigious Imperial College London. Apex has also used Laticrete UK products on three levels of an office block in the Tower Bridge area. Laticrete Hydro Ban is a thin, load-bearing waterproofing/crack isolation membrane that does not require the use of fabric in the field, coves or corners. Hydro Ban is a single component self-curing liquid rubber polymer that forms a flexible, seamless waterproofing membrane, and bonds directly to a wide variety of substrates.

Hydro Ban allows for flood testing in two hours at 21°c or higher, bonds directly to metal, PVC and ABS plumbing fixtures and is only 0.5 to 0.8mm thick when cured. Easi-Flex is an easy-to-use standard setting adhesive for fixing ceramic tiles, mosaics, marble and natural stone to solid impermeable floors, including those where sub-tile heating is installed. Available in white or grey, it gives a four-hour working time before curing at 24 hours to a fully water resistant bond suitable for interior/exterior use and location which are frequently wet. Its long open time and excellent non-slip properties make it the perfect choice for fixing large format wall tiles in circumstances where a ready-mixed adhesive would not be suitable.

SBR Bond can be used as a primer, bonding agent and sealer to improve adhesion strength between tile adhesives and floor screeds on a range of surfaces. It can be applied to a wide range of building materials including those where contract with water is likely. SBR Bond reduces surface porosity, dusting and improves initial tack so that subsequently applied adhesives, renders or screeds can achieve a secure and lasting key. It can act as a primer for porous worn surfaces, seals and protects porous timbers, mixes with cement to form a bonding slurry, forms a water-resistant protective seal and is an adhesion-promoting admixture in cement and mortar.

Charles Clapham, Managing Director of Palace Chemicals, said “we congratulate Apex Tilers on their achievements and prestigious schemes. It is especially pleasing to know that our products have helped on their road to success over the past 11 years. Long may our winning partnership continue.”

Click here to learn more about Hydro Ban, for Easi-Flex and SBR Bond.